2022-09-14 / First published: 2022-08-04
We are happy to announce that after the media picked up the story that Microsoft is blocking Tutanota users from registering a Teams account, Microsoft got in touch with us and fixed the issue. And while the issue is now resolved for Tutanota users, this example of anticompetitive behavior - even if out of negligence - shows why better antitrust legislation is needed.

We have contacted Microsoft support a while ago about the issue that Tutanota users were unable to register Microsoft Teams accounts with their Tutanota domain email addresses. However, Microsoft responded to us that fixing the issue was "not feasible" (read original post below for more details).

We then went public with the issue and after media outlets such as TechCrunch, security affairs, and ITPro picked up the story, Microsoft got in touch with us within a week.

They fixed the issue in August, finally defining all Tutanota domains as "public domains" - the way it should be for an email service and the way we had requested from Microsoft when first contacting them.

While the issue has been resolved pretty quickly by Microsoft after the right people contacted us following the media attention, we still believe that this example shows why we need better antitrust regulations.

It is not fair that a Big Tech company can ignore a small company's request to fix an issue that effects its users for months, and is only interested in fixing the issue after it received bad publicity because of this.

After all, not every small company has the option to go public, possibly because the media will decide their issue is not worth talking about or because they simply do not have established media contacts and find it hard to get through to the right people.

While we are very happy that this particular issue has now been fixed for all Tutanota users, we still believe that there must be a better way for companies to contact Big Tech and request fixes from them - one where they can not simply answer to the request with "Sorry, fixing the issue you are having is not feasible for us."

Politicians on both sides of the Atlantic are discussing stronger antitrust legislation to regulate Big Tech. These laws are badly needed as the example of Microsoft blocking Tutanota users from registering a Teams account demonstrates. The problem: Big Tech companies have the market power to harm smaller competitors with some very easy steps like refusing smaller companies’ customers from using their own services. 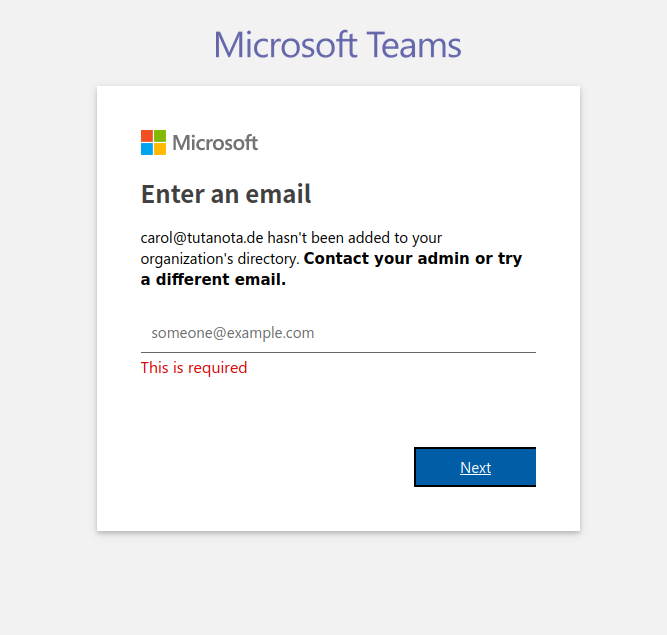 When asked to change the current situation, a spokesperson for Microsoft simply said it would not be possible for them to allow people to register a Teams account with a Tutanota email address. Period. We repeatedly tried to solve the issue with Microsoft, but unfortunately our request was ignored.

This is just one example of how Microsoft can and does abuse its dominant market position to harm competitors, which in turn also harms consumers.

The last successful antitrust case in tech happened in 1995 against Microsoft. At the time, Microsoft was one of the biggest tech companies as almost every computer was running Microsoft Windows. Back in the nineties Microsoft bundled their Internet Explorer browser into Windows OS so that every computer being sold also came with their built-in browser.

The case United States vs. Microsoft made the news back then. Microsoft lost the case and was no longer allowed to bundle the Windows operating system with the Internet Explorer.

Weakening Microsoft paved the way for a period of technological innovation. Following this successful antitrust case new tech companies emerged that have since adopted the practice of abusing their market power to stifle competition themselves: Google, Facebook, Amazon, and Apple.

At first glance, the deal consumers get from Big Tech is very beneficial, after all they can use the product for free. However, targeted advertisement also makes people pay.

By knowing consumers so well, Big Tech can place ads at the right moment and at the right price. For every major turn in life, the appropriate ad will appear. Say, you are invited to a baby shower. Ultimately you will be bombarded with ads for baby’s clothes and toys, but maybe a handmade gift would be much more suitable?

Consumers will lose the ability to make free and independent decisions due to the never-ending presence of advertisements and their influence.

The aim of Big Tech is to make you spend money – and they are very successful with that.

In recent years the demand for privacy is constantly rising. Big Tech companies such as Microsoft can not easily deliver this as a large part of their business relies on the profits made from targeted advertisements – and for that they need to track their users.

“We need to break up the market power of Big Tech like we did in the nineties. This will lead to a new evolution in today’s online world. One where products rise that concentrate on benefiting the consumer – not maximizing ad revenue”, says Pfau. “To free oneself from being tracked online, people need privacy-respecting alternatives. We have built a fully encrypted email service – Tutanota. We respect people’s privacy and protect their private emails from malicious attacks, prying eyes, and ad-based tracking. Due to the built-in encryption, tracking is impossible in Tutanota."

"However, competing with Microsoft is nigh impossible given their sheer market power."

Author
Matthias is co-founder and developer of Tutanota. I write code to fight for our human right to privacy. I want to create a cloud service which is so easy to use and so secure that it locks out all the spies. We really deserve better.
Top posts
Why choose the Tutanota desktop clients?
Whitelabel your secure Tutanota mailbox for business use.
Global Encryption Day: Any backdoor would do more harm than good.
Which is the most secure email service?
Green email is the future: Tutanota uses 100% renewable energy.
Email encryption: The ultimate guide to send an encrypted email in seconds.
Latest posts
Every day is Cyber Monday at Tutanota.
Why choose the Tutanota desktop clients?
Online Safety Bill Criticism
Every day is Black Friday at Tutanota.
LOAD COMMENTS
Terminate subscription
Company
You & Us
Jobs
Terms
Privacy
Legal notice
Development
Roadmap
Security & Encryption
GitHub
Features
Secure Email
Encrypted Calendar
Secure Connect
Business
Support
FAQ
Forum
Contact
Press
Language
English
Translate